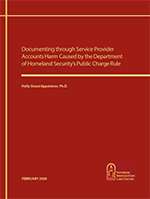 Drawing on interviews with 24 service providers working with immigrant communities in 11 states, the findings detailed in this report contribute to the body of accounts that seek to document the harm that stems from the public charge rule that was published by the Trump administration’s U.S. Department of Homeland Security in August 2019.

The interviews were conducted between the time the rule was published as a proposed rule in October 2018 until just after it was finalized. They reveal the range of individuals and families being chilled from participation in benefits and services and the conditions under which they feel at risk for doing so. These findings also identify implications for the service providers who work in immigrant communities as they seek to inform their clients and patients about the rule, overcome misinformation, and cope with burdens associated with chilling effects. While the U.S. president took multiple actions during 2018 and 2019 to restrict immigration and make life more difficult for immigrants in the United States, states overwhelmingly rejected harsh measures and instead advanced policies that improve the lives of immigrants in their communities across the country. Following the 2018 elections, and in response to the administration’s escalating threats, immigrants’ rights organizing advanced substantially in the states.

Advocates not only defeated most anti-immigrant proposals and secured policies limiting state and local entanglement in immigration enforcement, but they gained significant ground in campaigns to expand access to higher education, professional licenses, driver’s licenses, health care, and legal representation for immigrants. Collectively, advocates moved states to adopt major criminal justice reforms and measures to protect the privacy of both citizens and non-U.S. citizens.

This report highlights some of the victories won by immigrants’ rights advocates, organizers, and allies in the states during 2018 and 2019. 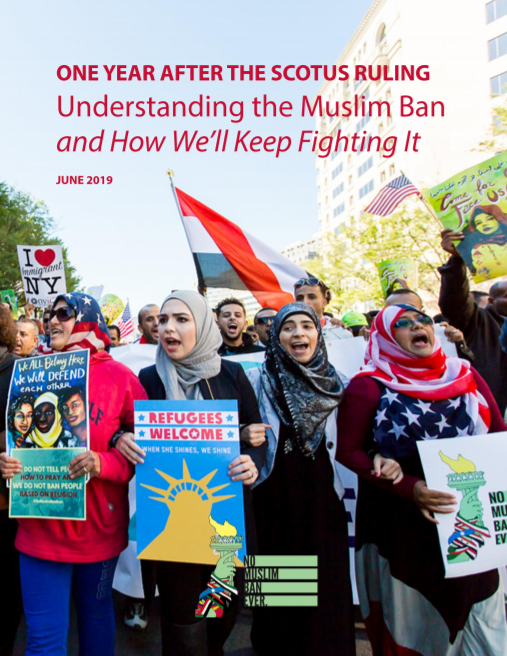 One Year After the SCOTUS Ruling: Understanding the Muslim Ban and How We’ll Keep Fighting It

On January 27, 2017, President Trump signed his first Muslim ban, immediately impacting thousands of people around the world. This executive order banned entry into the United States for 90 days of nationals from seven Muslim-majority countries, banned the entry of all refugees for 120 days, and indefinitely banned the entry of all Syrian refugees. It was the first of many horrific discriminatory policies the Trump administration has implemented.

Although the Supreme Court eventually allowed the third version of Trump’s Muslim ban to go into effect, the fight is not over. The No Muslim Ban Ever Campaign is supporting efforts in Congress and in the courts to (1) repeal the ban and (2) demand transparency and accountability for the ban’s waiver process, with the aim of exposing it as cover for the ban’s clearly discriminatory intent. While transparency and accountability with respect to the waiver process is critical, the campaign remains ultimately dedicated to making sure that Congress repeals the ban and prevents future efforts like it. 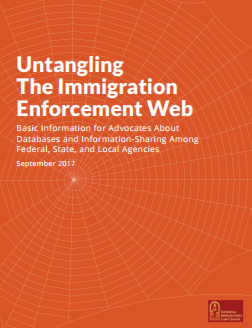 Untangling the Immigration Enforcement Web: Basic Information for Advocates about Databases and Information-Sharing Among Federal, State, and Local Agencies

We hope that the following questions and answers will give immigrants and their advocates a better understanding of (1) how the exchange of data among agencies at different levels of government occurs currently, (2) how to evaluate the potential immigration-related risks and benefits of interacting with federal and state authorities, and (3) how to forge strategies and measures that will protect immigrants more effectively. 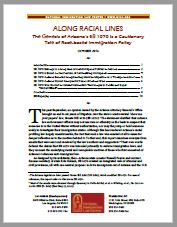 Along Racial Lines: The Genesis of Arizona’s SB 1070 Is a Cautionary Tale of Race-based Immigration Policy

For the authors and supporters of Arizona’s most notorious anti-immigrant law, SB 1070, the existence of the United States as a nation was being threatened by unauthorized immigration. Specifically, this threat was understood to come from immigrants entering the U.S. from Mexico. Their argument claimed that the nation could be saved from this threat only through the strict and punitive enforcement of the country’s immigration laws, even by way of flagrant racial profiling. Using the words of the very individuals who authored SB 1070—and of those who share that worldview—this report unmasks the underlying racism that motivated such an egregious law.

The civil rights groups that sued to try to prevent SB 1070 from being enforced have settled their lawsuit with Arizona authorities, just as the nation is embroiled in a public conversation that feels eerily reminiscent of private musings among SB 1070’s most ardent supporters. The email excerpts in this report provide just a few examples of why Americans should be alarmed by the motives behind Arizona’s law and laws cast from its mold. 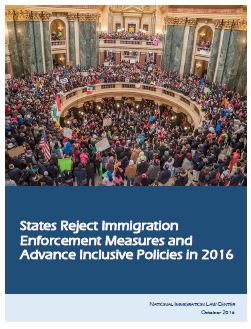 2016 marked a departure from earlier years, with a high-pitched partisan battle between state elected officials and President Barack Obama on immigration and refugee policy, as well as backlash against localities that had chosen to limit their entanglement with immigration enforcement efforts. Despite significant challenges, the groundwork built by immigrant rights advocates and allies proved effective in defeating virtually all the restrictive bills that were introduced. Thanks to strategic organizing by advocates, directly affected communities, faith-based groups and businesses, and to the testimony of municipal and law enforcement leaders, almost all of the anti-immigrant proposals died. 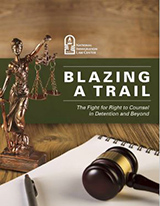 Blazing a Trail: The Fight for Right to Counsel in Detention and Beyond

The federal government has long interpreted the immigration laws to mean that immigrants have a right to be represented by counsel in their deportation proceedings, but not at government expense. Making the right to counsel a reality is an imperative for all immigrants in removal proceedings, but the situation is even more critical for detained immigrants. As this report shows, the very circumstances of detention make that right a legal fiction for almost all detained immigrants. Mounting empirical data show that having a lawyer to help navigate the complex maze of the immigration detention and court systems makes a profound difference in a person’s ability to gain release from detention, challenge the government’s grounds for seeking their deportation, and present and win a defense that allows the person to remain in the U.S.

Innovative projects in New York and New Jersey have begun to provide what we are calling in this report “universal representation,” i.e., representation to any detained immigrant within the jurisdiction of a particular immigration court who does not have a private lawyer and who meets certain income requirements. Inspired by these examples, other localities across the country are examining how they can develop similar programs. Immigrant-inclusive State and Local Policies Move Ahead in 2014–15

After a landmark year in 2013, the immigrant-inclusive state measures enacted that year were implemented and gained ground in 2014–15. States continued to expand access to higher education, driver’s licenses, health care, and professional licenses for eligible immigrants, regardless of their immigration status. Cities and counties adopted policies aimed at disentangling local law enforcement from federal immigration enforcement and explored providing access to legal counsel, health care, and municipal identification documents to their residents. State and local governments established offices charged with integrating immigrants and invested in assistance for people seeking U.S. citizenship or other immigration relief. Although a few restrictive measures passed—and though some serious threats are ongoing—immigrants’ rights advocates and allies defeated virtually all of the significant anti-immigrant proposals filed in the past two years.

Deferred Action for Childhood Arrivals: A Guide for Educators and School Support Staff

Compiled by NILC, United We Dream’s DREAM Educational Empowerment Program (DEEP), Own the DREAM, and the American Federation of Teachers (AFT). Published by AFT in April 2014; 14 pp.

As Congress debated federal immigration reform this year, states led the way by adopting policies designed to integrate immigrants more fully into their communities. In the wake of the 2012 elections, with Latino and Asian voters participating in record numbers, the 2013 state legislative sessions witnessed a significant increase in pro-immigrant activity. Issues that had been dormant or had moved in a restrictive direction for years, such as expanding access to driver’s licenses, gained considerable traction, along with measures improving access to education and workers’ rights for immigrants.

As part of the current national dialogue about reforming our country’s immigration laws, legislators in both the Senate and the House of Representatives have proposed a national mandate to require all employers to use E-Verify—an electronic employment eligibility verification system—to check their workers’ eligibility to be employed in the United States. In the midst of these discussions, U.S. Citizenship and Immigration Services released to the public a study narrowly focused on the E-Verify program’s accuracy rates. In this report, we analyze the findings of the USCIS-commissioned study and examine, more broadly, the adverse impacts on workers that would result from a national E-Verify mandate.

Racial Profiling After HB 56: Stories from the Alabama Hotline

Incidents reported by callers to the hotline reveal three dangerous trends: that the enactment of HB 56 has created a damaging environment of racial profiling by law enforcement officials; that the law’s provisions constitute state-sanctioned discrimination that, in turn, encourages private citizens to discriminate against and abuse people they suspect may be “foreign”; and that the provision requiring Alabama school officials to determine the immigration status of enrolled students (or that of their parents) has discouraged attendance and encouraged discrimination based on students’ appearance and perceived ethnicity.

Because the federal district court in Alabama declined to enjoin provisions in HB 56 that are similar to the “show-me-your-papers” provision of Arizona’s SB 1070, what began to happen in Alabama last fall provides a clear and deeply troubling preview of what we’re likely to see soon in Arizona, as well as in any other states that enact or enforce SB 1070 or HB 56 copycats.

This toolkit is designed to help communities prevent deportations by keeping local police separate from immigration enforcement. The essential link between police and U.S. Immigration and Customs Enforcment (ICE) is the ICE hold request, also known as an immigration detainer. On the basis of ICE hold requests, state and local police hold people in jail longer in order to hand them over to ICE.

Even if federal enforcement initiatives such as Secure Communities, 287(g), and the Criminal Alien Program continue to operate, they are only as effective as ICE hold requests allow them to be. Several communities have succeeded in enacting policies to stop submitting to ICE hold requests, and this toolkit is designed to help other communities establish similar policies.

Deportation Without Due Process: The U.S. Has Used Its “Stipulated Removal” Program to Deport More Than 160,000 Noncitizens Without Hearings Before Immigration Judges

Using a little-known government program, the U.S. Dept. of Homeland Security has pushed nearly 160,000 immigrants — many with deep ties to the United States — through an expedited deportation process, sometimes without adequately informing them of their right to a day in court, according to a new analysis of thousands of pages of released government documents.

The report, written by attorneys and law professors at Stanford Law School, NILC, and Western State University College of Law, determined that DHS agents administering the program provided legally inaccurate portrayals of the opportunities to remain in the U.S. in order to boost deportation numbers, even though judges and others involved in the program voiced their concerns about how the program short-circuited individuals’ rights.

This report presents the first-ever system-wide look at the federal government’s compliance with its own standards regulating immigrant detention facilities, a view based on previously unreleased first-hand reports of monitoring inspections. The results reveal substantial and pervasive violations of the government’s minimum standards for conditions at such facilities.

As a result, over 320,000 immigrants locked up each year not only face tremendous obstacles to challenging wrongful detention or winning their immigration cases, but the conditions in which these civil detainees are held often are as bad as or worse than those faced by imprisoned criminals.