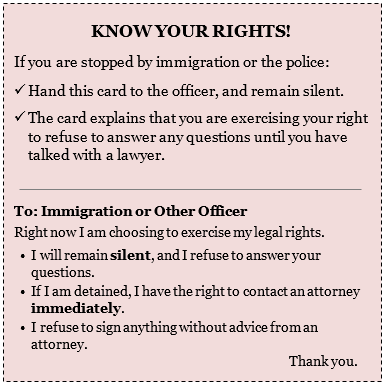 Everyone Has Certain Basic Rights, No Matter Who Is President
Donald Trump, who repeatedly made anti-immigrant promises during his campaign, began his term as president of the U.S. in January 2017. But no matter who is president, everyone living in the U.S. has certain basic rights under the U.S. Constitution—everyone, including people who are undocumented.

When Encountering Law Enforcement
Everyone Has Certain Basic Rights, No Matter Who Is President | Warrants & Subpoenas: What to Look Out For and How to Respond | Know Your Rights: A Guide to Your Rights When Interacting with Law Enforcement (CLINIC) | What to Do If You’re Stopped by Police, Immigration Agents, or the FBI (ACLU) | Know Your Rights When Encountering Law Enforcement (ACLU) | The U.S. Supreme Court Has Upheld a Nevada Law That Requires Individuals to Identify Themselves to Police When Asked (not all states have such a law)

Immigration Enforcement at Workplaces
What to Do if Immigration Comes to Your Workplace (a guide for employers) | Lessons from East Tennessee: A Toolkit for Organizations Responding to Mass Worksite Immigration Raids