A Toolkit for Organizations Responding to Mass Worksite Immigration Raids

On April 5, 2018, U.S. Immigration and Customs Enforcement (ICE) conducted a massive worksite raid in Bean Station, Tennessee, outside of Morristown, arresting nearly 100 workers at a meat processing plant. This was the first large-scale worksite immigration raid conducted in the United States in nearly a decade. 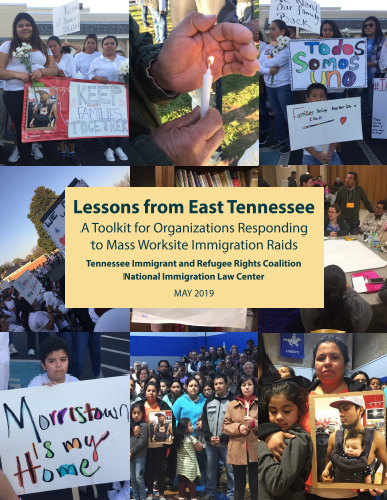 The Tennessee Immigrant and Refugee Rights Coalition (TIRRC), in partnership with local and national organizations, organized a robust response to defend the workers, support the affected families, and help the local community to process what ICE had done and understand the raid in a broader context of immigration policy.

Since the East Tennessee raid, ICE has conducted mass worksite raids in Arkansas, California, Iowa, Minnesota, Nebraska, North Carolina, Ohio, and Texas, and the Trump administration has continued to signal an increased use of this brutal tactic. In the aftermath of the East Tennessee raid, we developed a model for a robust, coordinated response to defend workers and transform the community in the wake of a massive raid and want to share our approach, resources, and tools with other organizations that may respond to worksite raids in their states.

While many toolkits are designed to help organizations prepare in advance for ICE actions in their community, this one is meant to serve as an emergency toolkit that advocates can reference to respond the moment ICE conducts a worksite raid in their community.

THIS TOOLKIT WAS PREPARED by Jessie Hahn, Julien Ross, and Stephanie Teatro for the National Immigration Law Center (NILC) and the Tennessee Immigrant and Refugee Rights Coalition. It was edited and formatted by Richard Irwin, NILC’s editor and publications manager. All photos are by Isaias Guerrero, except those on pages 18, 25, and 28.

To download the toolkit, click on the PDF icon or the image of the toolkit’s cover, above.

About the toolkit
Acknowledgments

Organizing our response to the raid

What made the Morristown response effective? What lessons were learned?

Read this: If an ICE raid happens in your community