“The NILC board sets the strategic direction of the organization, and the additions of Omolara Uwemedimo and Axel Caballero will ensure that we continue to lead with a values-based approach that makes a meaningful difference for immigrants and our country,” said Marielena Hincapié, NILC executive director. “NILC is unwavering in our commitment to ensuring that all communities, including immigrants, can thrive.  Omolara and Axel bring crucial perspective and talents to our board from their leadership in the social justice movement and in narrative and culture change, as well as their work to help bring visibility to our communities’ stories. I’m excited and honored to work with them to help propel our organization forward.”

“I am honored to have the opportunity to contribute to the ambitious and inspiring work of the National Immigration Law Center,” Dr. Uwemedimo said. “As a clinician and public health advocate who has served immigrant populations throughout my career, NILC’s resources and tools have been pivotal to my work. For years, NILC’s work has ensured that I can be the best advocate for immigrant families. I hope to use my position on the Board to provide as much value as possible to this necessary work.”

“The National Immigration Law Center serves a critical role in defending and advancing the rights and opportunities of low-income immigrants and their families,” Mr. Caballero said. “Especially at a time when certain politicians scapegoat and dehumanize immigrants, NILC’s visionary and multifaceted leadership is needed in the fight for immigrant justice more than ever. I’m thrilled to be joining NILC’s board and look forward to working to advance the organization’s vision for a more just, inclusive and welcoming society.”

Dr. Omolara Uwemedimo serves as the founding director of the Global and Immigrant Health Training Program at Cohen Children’s Medical Center in Queens, NY, a position she’s held since 2013.

She is a social justice pediatrician, advocate, and researcher who is passionate about health equity. She has committed her career to empowering families of color through culturally-responsive clinical care, research, education and advocacy in the U.S. and extensively in sub-Saharan Africa, Asia, and the Caribbean.

Uwemedimo has held several administrative leadership positions, including serving as codirector of the Resident Scholarly Oversight Committee at Cohen Children’s Medical Center and as a member of the Global Health Pediatric Education Group Steering Committee for the Association of Pediatric Program Directors. In addition, she has served as an adjunct professor in the MPH Program at Hofstra University and as an assistant professor of clinical pediatrics at Columbia University Medical Center. Uwemedimo is also a member of the American Academy of Pediatrics, the Academic Pediatric Association and the Association of Pediatric Program Directors. 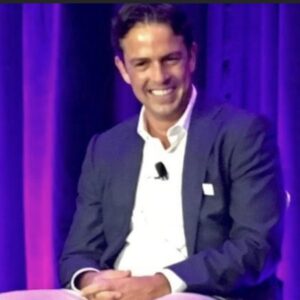 Caballero previously served as the director of corporate social responsibility (CSR) at HBO and as the executive director of the National Association of Latino Independent Producers (NALIP). Before joining NALIP, he had been active in a number of media and campaign projects, spanning Latino media fairness and equality to immigration and human rights, with a focus on the development of short films and documentary films. Caballero is the founder and executive producer of Cuentame, Latino Lens and Goodness Films, as well as founder of the Spanish-language opinion site Metafora Politica. He has produced and directed over 500 short films and videos, with an emphasis on telling Latino stories by and for Latinos throughout the general market.

Caballero was born in Hermosillo, Sonora, Mexico. He holds a B.A. in political science, law and society, and visual arts studies from University of California, San Diego. He received his master’s in international law and human rights with a focus on advancing rights through visual mediums from the University of Utrecht in the Netherlands.